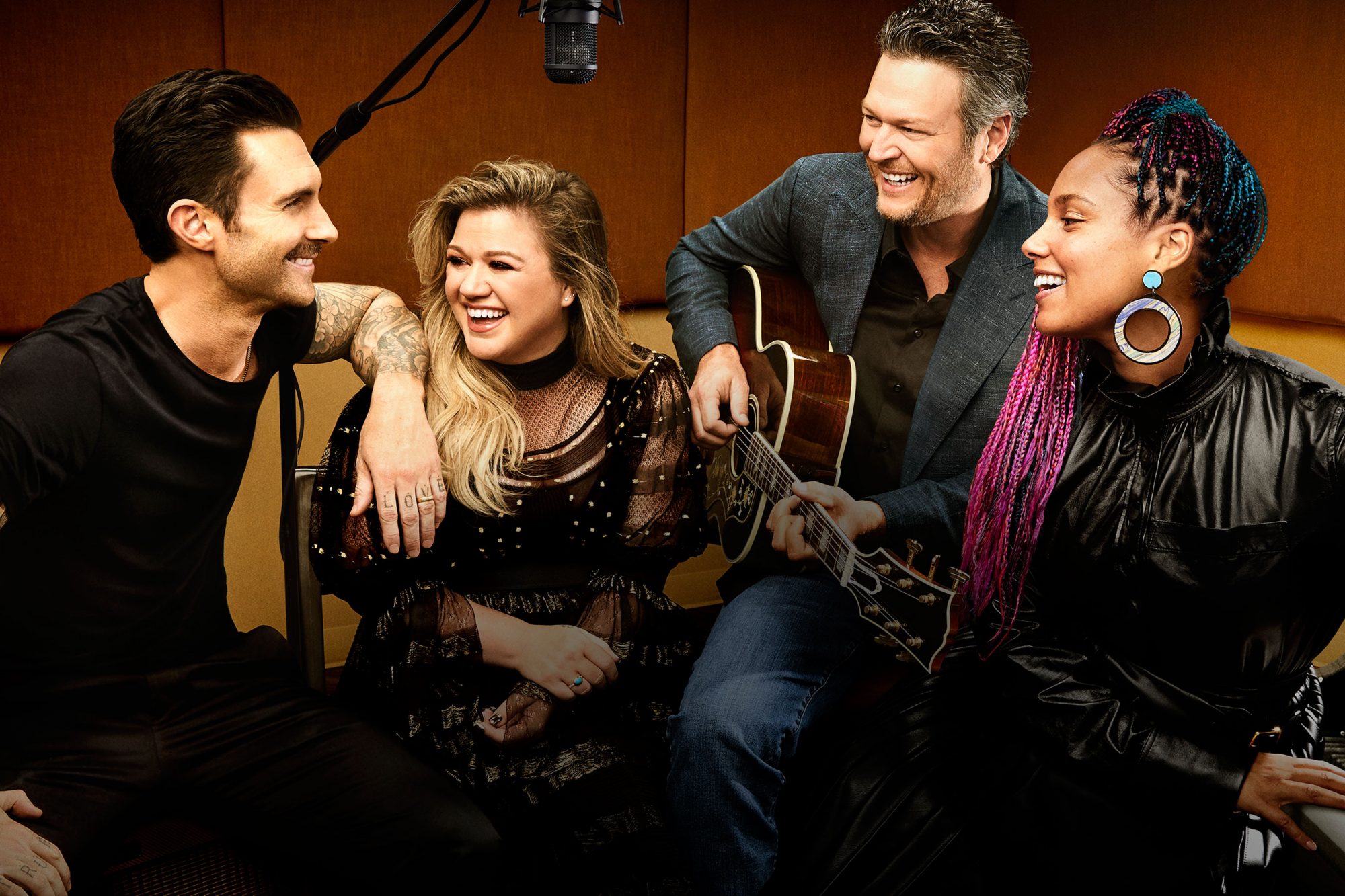 The search for the next Voice champion continues this week and with only ten spots on each team this season, the coaches are being extra cautious about their picks, which, tonight, means there are several surprising one-chair turns. Let’s see who inspired Blake Shelton, John Legend, Nick Jonas, and Kelly Clarkson enough to give up some precious spots on their teams.

Anaya Cheyenne, 16, Atlanta, Ga. // “I’ll Never Love Again”
This child has her own theme song, what more does she need?! I mean, I guess a spot on The Voice would be nice after moving away from her mother to pursue music and performing arts in Atlanta. But still, a theme song! Anaya starts out a little hesitant but holy hell if this girl doesn’t do runs that basically hit every single note in existence. Blake waits to see if Kelly is going to turn for this big-voiced pop vocalist — clearly, her wheelhouse — and then turns as soon as she does. He tries to sell his “sometimes the best artist-coach combos are the ones that don’t make sense” line but everyone else is like, um, you should really be with Kelly if you have pipes like that.
Coach: Team Kelly, of course.

Mandi Thomas, 33, Memphis, Tenn. // “Time To Say Goodbye”
It’s a real blind and it is AN OPERA SINGER. Kelly Clarkson’s prayers have been answered. None of the other judges even want to touch Mandi because they have no idea how to handle a voice like hers, so Kelly, thankfully, doesn’t have to fight for this classically trained singer. Mandi can sing anything but wanted to show off something different. Her voice is a true instrument, so it’ll be interesting to see what songs Kelly and Mandi choose in later rounds and how she holds her own against more contemporary-sounding artists.
Coach: Team Kelly is two-for-two tonight!

Ari Tibi, 27, Calabasas, Calif. // “The Joke”
Our third female vocalist in a row hails from a female trio folk-pop band. You can tell she’s polished and comfortable up there on stage, but the performance is lacking an emotional connection and there are some sour notes throughout. All of the judges are basically like, yeah, you’re obviously talented, but you could do this song much better. They all want her to come back again. That’s some positive feedback in a less-than-positive situation.
Coach: n/a

Jacob Miller, 29, Eden, Wis. // “The Times They Are a-Changin’”
Oh, friends, I’m excited about this one. Jacob is a songwriter and performer who plays ragtime and jazz and thinks his musical tastes would fit better in the 1920s than today. Also, he’s insane on the guitar. He’s got a great sound that will really stand out on this show. Please, please The Voice, don’t ruin him. Kelly, Blake, and Nick all turn. Kelly would love to bring his sound to new audiences by blending with contemporary music. Blake wants to protect what Jacob does at all costs. And Nick mainly sounds interested in working with him so that he can collaborate with the Jonas Brothers. An interesting pitch tactic!
Coach: Against all odds, Jacob joins Team Nick! Jacob Jonas it is, I guess.

Jon Mullins, 32, Nashville, Tenn. // “Don’t Give Up On Me”
Jon is a full-time musician in Nashville and three years ago, his wife suffered brain injuries after a fall. They’re on the other side of it now, but this is all for her — and you can feel that extra-emotion in Jon’s performance. This guy’s voice is so commercial and he has such a big, beautiful range, I’m surprised he ends up being a one-chair turn. And it’s not just any one chair. It’s a Blake Shelton one chair. Being a Nashville guy, Jon seems pretty pumped about it and is beyond grateful to be “on the team with the king.” Blake will never let being called the king go. He has been coronated, it is decided. The crowd chants “King Blake,” he is our master now.
Coach: Team Blake, baby.

Jacob Daniel Murphy, 27, Elk Grove, Calif. // “Until You Come Back to Me (That’s What I’m Gonna Do)”
Well, at the very least, Blake is becoming the King of One Chair Turns. Incredible, Jacob Daniel Murphy completely THROWS DOWN on this song, with a big range and lots of connection, and no one turns until the very end when Blake finally goes. He explains that he assumed he’d have no chance and so wasn’t going to bother, but when he saw no one was going, he felt like he was “robbing a bank.” Blake is impressed with Jacob’s great pitch, big range, and controlled runs. It might not be a likely pairing, but we know how Blake feels about those.
Coach: Another easy pickup for Team Blake.

Zan Fiskum, 22, Seattle, Wash. // “Light On”
Zan lives in an RV in her parents’ backyard as she tries to make a living as a musician. I love Zan. She’s very much in the indie-pop/folk world and she owns it. Her voice is clear and precise, and as John notes, she somehow has both power behind her vocals and can easily slip into a more ethereal vibe. She’s both polished and able to connect emotionally. She’s a great get for any team, which is why Kelly, Nick, and yes, John Legend in his first chair turn of the night, all fight for her. Zan makes it look effortless, and everyone wants someone like that on their team.
Coach: This could go any way, but in the end, Zan feels like John would be the best fit for her style, so she joins Team Legend.

Chan Fuze, 23, Chicago, Ill. // “Groove Me”
Dang, Kelly Clarkson is so right: The Voice is just not the right settling for Chan to thrive. This man is 6-foot-10, rocks a velvet button-down like he was born in it, and has some moves. Unfortunately, none of this matters when the coaches can’t see you. Poor Chan here gets zero chair turns. Blake thinks that there was too much emphasis on the showman part of the performance and not enough on the singing. John doesn’t think Chan’s falsetto was “as effective” as it needed to be. None of this gets Chan down though, he is still a party in human form.
Coach: n/a

Roderick Chambers, 38, Miami, Fla. // “Back At One”
When Roderick started off with the Brian McKnight JAM, both Kelly and I jumped. More Brian McKnight on this show, please! Roderick has been a musician for most of his life, he was in a group with his brother when he was younger, but has since been living as a solo musician in Miami. It’s not the most dynamic audition we’ve seen this evening, but Nick is right — Roderick has a voice that could sound great on anything. John compares Roderick’s tone to Nick’s, so maybe this one-chair turn is working out for the best.
Coach: It’s Team Nick always and forever here.

Jules, 15, Peoria, Ariz. // “Ain’t No Rest for the Wicked”
Jules is only 15 but has been playing guitar since she was six, and gigging since she was 12. That is a hard-working teenager, you guys! It shows because Jules walks up on stage with a lot of confidence — she does her own arrangement on this song to set herself apart. Her poor dad looks like he might pass out at any moment and he has to wait until the very end to find some relief. Both Blake and Kelly turn at the last minute. Kelly loves that a 15-year-old girl has such control over her lower register and can’t believe she has such a mature voice for being so young. Blake says something about the Arizona Cardinals.
Coach: Her family is pushing Blake, but Miss Independent joins Team Kelly (you’re welcome!).

Jared Harper 22, San Francisco, Calif. // “(I Can’t Get No) Satisfaction”
Jared, who is deaf in his right ear, was inspired by Maelyn Jarmon and is here on The Voice to take the next step in his music career. Unfortunately, he never really connects with the song and ends up with no chair turns. Blake was waiting for the energy to be kicked up a notch and both he and John note some pitch problems that made them hesitant to turn.
Coach: n/a

Michael Williams 18, Mason, Ohio // “You Say”
Look at this little cutie! Michael has a digestive disorder and, at one point, never expected to feel well enough to perform again. He’s got a big range but doesn’t quite hit the high note in his falsetto — which is exactly why Nick Jonas turns his chair for him. Nick had to work long and hard on his falsetto and he wants to get Michael’s into shape. Nick is really winning me over with pitches like this. He’s giving this kid a chance!
Coach: Team Nick, but sing it in falsetto.

Mike Jerel, 31, Ashburn, Ga. “It’s A Man’s, Man’s, Man’s World”
The Voice clearly saved the best for last tonight. After a whole slew of one-chair turns, we’re ending the evening with a four-chair turn, baby. Everyone wants a piece of Mike Jerel. Oh, you guys, he is SO GOOD. There’s intensity and emotion and complete control of both his voice and the piano. The place goes crazy. Honestly, has John Legend ever been this excited about a potential artist joining his team? Everyone assumes Mike is going to pick John, but holy hell do they fight anyway. Kelly’s pitch is particularly, at least momentarily, persuasive: She makes sure Mike knows that on John’s team, he’ll be fighting for spots with every other singer who plays piano on this show, but she has no male artists and no pianists on her team. It’s all him. None of this matters though because Mike’s mom wants him to pick John.
Coach: Team Legend — come on, you can’t go against mom.

A rotating chair-full of judges search for the next great superstar singer on this NBC reality show.