It’s been 10 years since we first met Scarlett Johansson’s Natasha Romanoff, handily taking down Happy Hogan in Tony Stark’s boxing ring. Over the last decade, she’s evolved from morally conflicted superspy to avenging hero and, ultimately, the sacrificial savior of the universe. With Nat finally stepping into the spotlight for her own solo film, EW asked Johansson to look back on a key scene from every Black Widow appearance.

Iron Man 2 (2010)
The superspy made her MCU debut with a brutal hallway fight, knocking down bad guys and setting up her next decade on screen. “A lot of the moves are really spider-like, they’re balletic, and they pay homage to Natasha’s past,” Johansson explains. “I’m still doing a lot of those moves today, just a little bit more creaky.” Time comes for us all, even trained assassins.

The Avengers (2012)
One of Natasha’s key moments comes early in The Avengers, as she and Loki (Tom Hiddleston) verbally spar and try to wheedle information out of each other. It’s one of the audience’s first glimpses into Natasha’s past, and Johansson says the scene owes its back-and-forth energy to Avengers writer-director Joss Whedon. “It’s got this great dramatic intensity, and then it’s just super playful,” she adds.

Captain America: The Winter Soldier (2014)
Johansson and Captain America star Chris Evans first worked together a decade earlier in 2004’s The Perfect Score, and the actress says it’s their off-screen friendship that made scenes like this — where Steve and Nat — so effortless. “It’s really a result of 10 years of knowing somebody and being able to have a kind of intimacy with them that I think you get from just spending a lot of time with somebody and knowing their soft underbelly,” she says.

Avengers: Age of Ultron (2015)
As a general rule, most spies dedicate their careers to putting up walls, but this Age of Ultron moment with Mark Ruffalo‘s Bruce Banner is a rare moment of vulnerability for Nat. As for the scene itself — in which Natasha opens up about her forced sterilization and inability to have children — filming it required a bit of movie magic. “[It was] ironic because I was also really pregnant at the time,” Johansson adds with a laugh.

Captain America: Civil War (2016)
Until Infinity War united its heroes for the fight against Thanos, 2016’s Civil War held the record for the most Avengers in one place, thanks to its climactic airport runway battle. On the days Johansson shot the scene in Atlanta, the temperature of the tarmac soared above 100 degrees — but the result, she says, was worth it. “I remember both sides running at each other, full speed charging at each other, and you knew that the universe would be forever changed after that.”

Avengers: Infinity War (2018)
The final Wakanda battle in Infinity War sees Natasha teaming up with Elizabeth Olsen‘s Scarlet Witch and Danai Gurira‘s Okoye to take down Proxima Midnight (Carrie Coon). “We were just this random other unit that was fighting in a ditch for like weeks,” Johansson says with a laugh. “When Lizzie came along, we were like, ‘And where have you been! You get to do the awesome hero pose, and we’ve been eating dirt for three weeks!’”

Avengers: Endgame (2019)
Nat’s final hero moment, where she sacrifices herself for the Soul Stone, was originally filmed as a chase scene with an “army of Dementor-type creatures,” Johansson reveals. “I was thinking, ‘Parents will never forgive us for how these creatures look.’” But the sequence felt too busy in an already action-packed film, so she and Jeremy Renner later reshot it as a quieter, more emotional confrontation. “We wanted to leave [the audience] with the weight of that loss and the shock of it,” Johansson says. 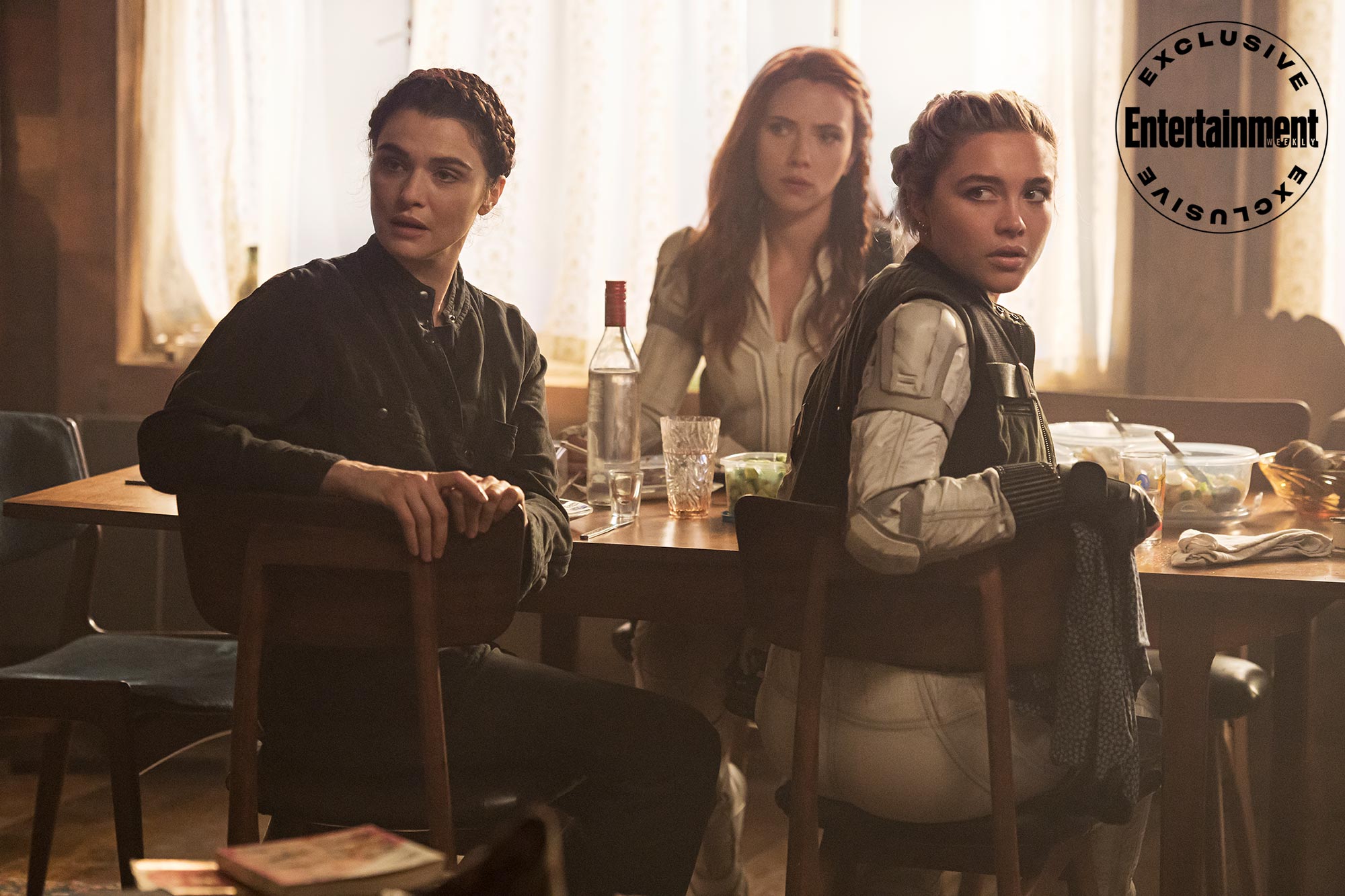 Black Widow (2020)
Audiences at 2019’s San Diego Comic-Con were treated to an early cut of this scene from the solo Black Widow movie, where Nat reunites with her “sister,” Florence Pugh‘s Yelena Belova — and they proceed to beat the crap out of each other. (It was also one of the first scenes Pugh and Johansson shot together, and it forced them to get up close and personal fast.) “It’s like when you see prize fighters who have come together to have a second go at it, and you know that there’s all that built-up tension in a good kind of way,” Johansson explains.

BONUS SCENE: The Avengers (2012)
One of Johansson’s personal highlights is the moment the Avengers, well, assembled, for the now-iconic 360-degree shot during the Battle of New York. “I remember all of us assembling in that circle and looking around,” she explains. “All of us had a moment where we were like, ‘Oh. This is going to work.’”

To read more on Black Widow, pick up the new issue of Entertainment Weekly beginning on Tuesday, March 17, or buy it here now. Don’t forget to subscribe for more exclusive interviews and photos, only in EW.