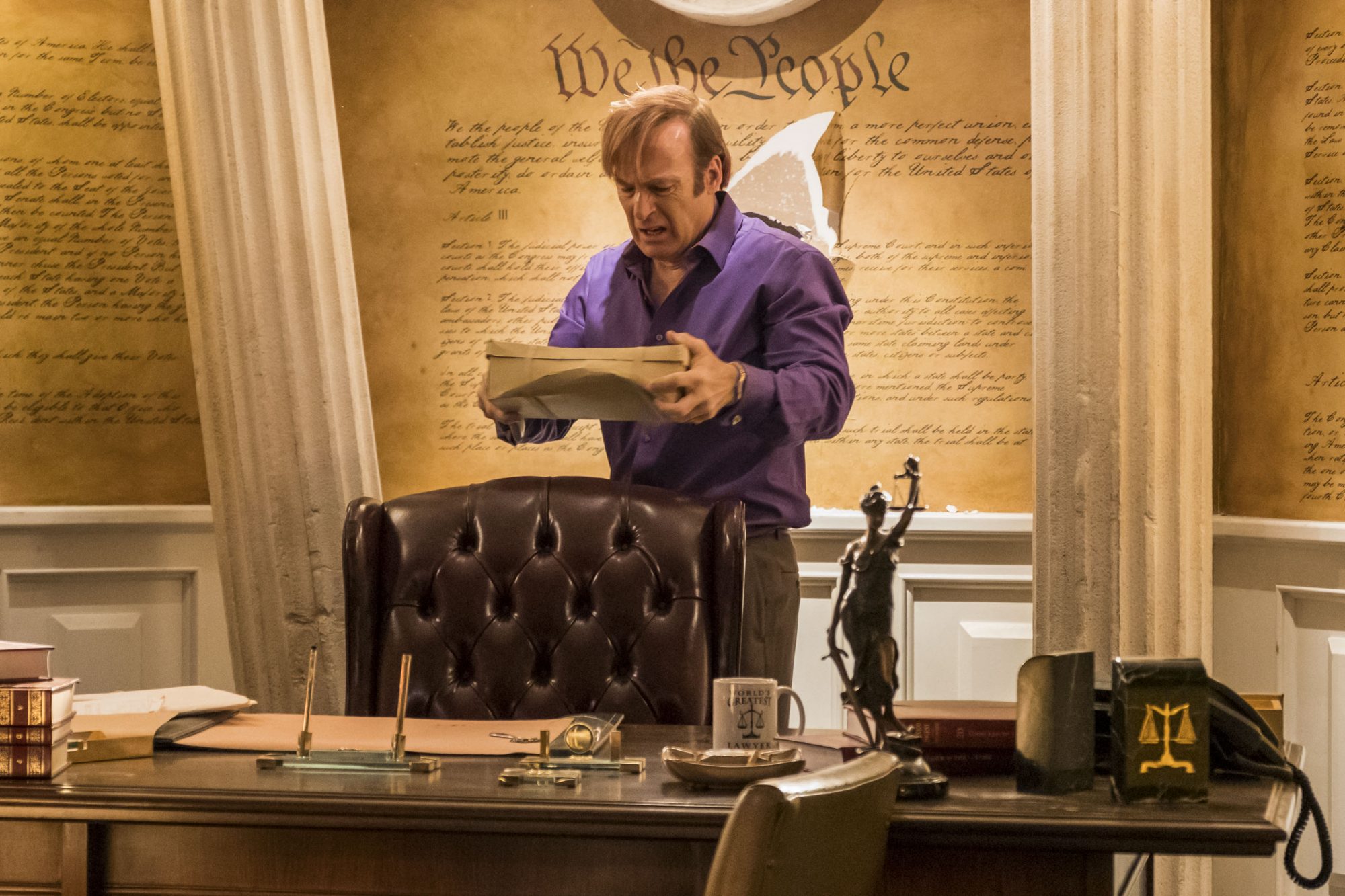 Where last week’s Better Call Saul cold open was a majestic work of art, this week’s is a titillating mystery: in the first moments of this episode, titled “Namaste,” Jimmy McGill enters an antiques store. He’s looking for the perfect, vintage… Shotput? Workout accessory? Bludgeoning device? A diverse collection of objects is put to the heft test: a TV, a teakettle, a kettlebell. A mallet. A typewriter. A Buddha sculpture. A bowling ball? No, even better: three bowling balls.

We’ll have to wait until much later to find out the purpose of Jimmy’s shopping excursion. For now, we cut to the title credits and then to Jimmy and Kim’s apartment. There’s a half-eaten pizza sitting on the coffee table, and the couple is asleep and nude — but between the pizza and the pair of Jimmy’s shoes that are propped atop each other in a way that suggests removal by a very, very drunk person, the whole vibe is distinctly unsexy. Less post-coital bliss, more the kind of naked where you wake up with a mouth that tastes like a trash can and no memory of having removed your clothes.

Kim is determined to clean up the mess she made, starting with the busted beer bottles she chucked into the parking lot last night. While she sweeps, she consults with her assistant about property records for the Mesa Verde call center in Tucumcari — clearly formulating a plan, confident that she can fix things. Jimmy, meanwhile, has an appointment with the ambiguously dumb duo previously seen painting the town red in “50% Off.” This meeting plays out pretty much as you’d expect: of course the guys thought they could pay Jimmy’s fee with the money they stole, and of course they have no other funds. One of them has a grandma he can hit up for cash, which Jimmy tells him to do — and that’s it for now, but probably not for good. (What are the chances that the grandma in question is someone Jimmy knows from his previous life as an honest elder law attorney? What are the chances this ends well? Discuss.)

From there, Jimmy heads to the only nice restaurant in town (or at least the only one we ever see), where we find out what Howard Hamlin has been up to since last season. Over drinks, Howard asks Jimmy some cursory questions about Saul Goodman, but it’s Jimmy he really wants — as an employee. Ah, yes: all it took was a series of ridiculous scandals and the tragic suicide of one of the firm’s namesakes, but Howard Hamlin has finally decided that he wants his boy, “Charlie Hustle,” on the roster at HHM, and the only thing more fascinating than the barely-masked resentment on Jimmy’s face is that Howard somehow doesn’t see it. He’s so distracted by the shiny prospect of his own redemption, finally being the good guy, that he’s blind to the fact that it’s much too little, much too late. But just in case you’re not sure how you’re supposed to feel about Howard in this scene, do enjoy the too-long, too-close hug he gives Jimmy before driving away in his valet-parked sports car with a vanity plate that says… NAMAST3.

This, too, will not end well.

While Howard Hamlin drives off into the sunset, Saul Goodman has an afternoon in court, defending a client accused of robbery, and Kim shows up to watch the action just as a Mr. Harkness takes the witness stand. (Fun fact: Although his name didn’t appear in the credits, that’s definitely Tim de Zarn, the wonderful character actor who played Mordecai the Harbinger of Doom in Joss Whedon’s Cabin in the Woods.) Harkness points to the bearded man sitting at the defense table: There’s the robber, he says. Your client. Jimmy pushes him: Is he sure? Did he really get a good look? The witness insists that yes, it’s the man at the defense table who robbed him, at which point Jimmy reveals that the guy at the defense table… isn’t his client. Ha! The real Slim Shady stands up — he’s been seated in the gallery while a doppelganger with similar facial hair took his place at the defense table — and the whole courtroom erupts. “Mr. Goodman!”, the judge scolds, and Jimmy grins, totally in his element.

“You didn’t recognize him either, your Honor.”

These are the sort of courtroom antics that have always made Kim uncomfortable, but this time, they’re exactly what she’s here for. Earlier, we saw her try and fail to convince Mesa Verde to choose another location (read: one not already occupied by a cantankerous senior citizen) for their call center. If she wants to do right by Mr. Acker, she’d better call… you-know-who.

Some time later, Saul Goodman knocks at the door of Acker’s home and presents him with a proposal for legal services, and by “proposal,” we mean “a picture of a man having sex with a horse.” But it’s a metaphor: Saul is the man, Mesa Verde is the horse, and — once again, and much like man-on-horse carnal relations — this probably won’t end well, either. Not for the horse, but also not for the horse’s lead counsel.

Meanwhile, it’s time for yet another crowd-pleasing cameo from everyone’s favorite DEA agents, as Hank and Steve stake out a dead drop to see if Krazy-8’s information is good. The scene is intercut with a tense interaction at Los Pollos Hermanos, as a stressed-out Gus waits for the phone to ring and passes the time by terrorizing his kitchen manager over an inadequately-maintained deep fryer, but let’s be real, it’s Hank’s ambient musing about the etymology of the word “culvert” that really brings the drama here. At the end of the night, the DEA has bagged nearly a million bucks in drug money and arrested several low-level guys — all according to Gus Fring’s plan. (Also, in case you were wondering, the origins of “culvert” are unknown, but the Dutch word for crotch rot is “kruis rot.”)

It went down like it was supposed to. That’s what Victor tells Gus after the DEA raids the dead drops, but it feels more broadly true. This whole episode has a sense of doors closing and destinies taking shape. Jimmy, finally given the chance to come aboard at the firm that already bears his name, doesn’t just decline the offer; he pitches a bowling ball through the back window of Howard Hamlin’s car. (Namaste!) Kim, instead of saying a serenity prayer and getting on with her work, sets up her biggest client for a humiliating setback in court. But at the very end, all this inevitability is balanced out by mystery: Mike, still spiraling over Werner’s death and his unresolved guilt over Matty, goes out once again looking for a fight — and wakes up on a goat farm in the middle of nowhere. Where is he? How did he get there? And most importantly, to whom does he now owe his life?

Saul Goodman, first introduced in Breaking Bad, gets his own Vince Gilligan prequel.